Keynote: Emerging options for solving the arsenic problems of rural and periurban areas in Latin America 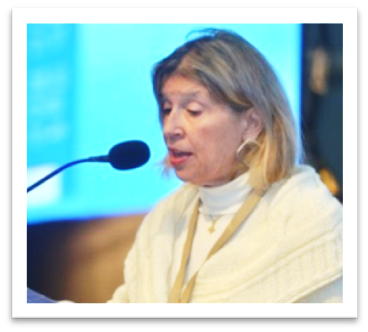 Marta Irene Litter has a PhD in Chemistry (Buenos Aires University, Argentina), with Post-doctoral studies at the University of Arizona, USA. She is Superior Researcher of the National Research Council and Full Professor at the National University of General San Martín. She has been Head of the Division of Environmental Chemistry Remediation (National Atomic Commission) all in Argentina. She has more than 200 scientific publications in international journals, books and book chapters. She has received the Mercosur Prize in Science and Technology (2006 and 2011) and was President of the International Congress on Arsenic in the Environment (2014). She was designated Pioneer on photocatalysis in Argentina (2016) and accepted as Member of TWAS (2018).

Contamination of water by arsenic (As) is a worldwide problem with high impact in the poorest regions, with more than 226 million people exposed. The most affected populations are those in low income countries. The higher concentrations and, consequently, the most important health problems are localized in Argentina, Bangladesh, Nepal, Chile, China, Hungary, India, Mexico, Romania, Taiwan, Vietnam and the USA. In Latin America (LA), the problem affects at least 14 countries (Argentina, Bolivia, Brazil, Chile, Colombia, Cuba, Ecuador, El Salvador, Guatemala, Honduras, Mexico, Nicaragua, Peru and Uruguay), and the number of exposed people could be estimated in around 14 million. The most critical areas are located in Argentina, Chile and México. Emerging, low-cost technologies to mitigate the problem of arsenic in drinking water resources of Latin America, suitable for rural and periurban areas lacking centralized water supplies have been evaluated. The technologies use generally simple and low-cost equipment that can easily be handled and maintained by the local population. Experiences comprise of coagulation/filtration with iron and aluminum salts, scaled-down for small community- and household-scale-applications, adsorption techniques using low-cost arsenic sorbents, such as geological materials (clays, laterites, soils, limestones), natural organic-based sorbents (natural biomass), and synthetic materials, use of constructed wetlands with native perennial plants for arsenic rhizofiltration, capacitive deionization, zerovalent iron especially using nanoscale particles and solar technologies including TiO2-heterogeneous photocatalysis.

Niki Baccile has graduated from the University of Padova (Italy) and has completed his PhD in Materials Science from University Pierre and Marie Curie, Paris 6 (now Sorbonne University) and Post-doctoral studies from University of Montpellier (France) and Max-Planck-Institut für Kolloid- und Grenzflächenforschung Stute (Germany). He is a CNRS Researcher at the Laboratoire de Chimie de la Matière Condensée de Paris at Sorbonne University. He has published more than 70 papers in internationally renowned peer-reviewed journals on topics going from Green Chemistry, Materials’ Chemistry, Physical Chemistry and Soft Matter. He has contributed to the developments in the field of biosurfactants in the past 10 years, collaborating with the worldwide experts in the field of Industrial Biotechnology.

Microbial biosurfactants are one of the most fascinating success stories in the field of green chemistry since at least four decades. Specific microorganisms are able to produce large quantities of biodegradable molecules with surface active properties. If phospholipids, lipopeptides, glycolipids and polymers are the major classes, glycolipids certainly constitute the most interesting one for the large produced amounts. Compounds like sophorolipids and rhamnolipids are now well-known and routinely employed in detergent and cosmetic formulations, for their low toxicity and high biodegradability. Despite these important achievements, many questions still lie unanswered and the potential of these molecules is in fact largely underexploited, especially in other domains like colloid chemistry and materials science. This paper will discuss the hydrogel-forming properties of this class of molecules. Hydrogels are an important class of soft materials and they are generally composed of polymers. However, low-molecular weight gelators are becoming more and more important for their stimuli-responsiveness and improved toughness. The hydrogel-forming potential of biosurfactants was only discovered very recently and we aim at showing the latest advances in this field.