Robert Tuba has obtained his MSc (1998) and PhD (2003) degree’s from University of Veszprem. After a Post-doctoral study at Eotvos Lorandt University, he joined the Research Group of Professor John A Gladysz at Friedrich Alexander University Erlangen-Nurnberg as an Alexander von Humboldt research fellow. From 2007, he was working at the GlaxoSmithKline Biologicals as a Process Development Supervisor. In 2011, he joined the Texas A&M University at Qatar as an Assistant Research Scientists. He was a Visiting Associate in Chemistry in California Institute of Technology at the Research Group of Professor Robert H Grubbs, in 2013. Currently, he is the Head of Green Chemistry Research Group at the Hungarian Academy of Sciences.

Olefi n metathesis is a powerful and versatile green method in synthetic organic and polymer chemistry. Th ese reactions in general are very selective and require mild reaction conditions as well as low catalyst loadings. Th e atom economy of these synthetic procedures is often 100% indicating that all the starting materials are incorporated into the end products. Cross metatheses of a non-edible vegetable oil, the tung oil or α–eleostearic acid (ESA) methyl ester (1) with cis-1,4-diacetoxy-2-butene (2) using Hoveyda-Grubbs (3-HG2), Grubbs second or third generation catalysts (3-G2 or 3-G3), followed by Pd/C catalysed hydrogenation, gives methyl (ω) 11-acetoxy-undecanoate (4) as a polyester raw material, 1,6-hexanediol diacetate (5), the precursor of 1,6-hexanediol polyurethane monomer and heptyl acetate as a fragrance (6) in 51-99% yields. The onepot
isomerisation of the isolated double bonds containing vegetable oils
such as α–linolenic acid (ALA) methyl ester (7) using RuHCl(CO)(PPh3)3 catalyst followed by in-situ cross-metathesis (CM) of the reaction mixtures with 2 using 3-G2 leads also to the formation of 5 and the homologs of 4 and 6. Th us, in the latter approach, the key step of the synthesis of 5 is the one-pot isomerization of the isolated double bonds of 7 into conjugated ones in combination with a subsequent cross-metathesis using crosscoupling agent 2.

Keynote: Current state of the art on green synthesis of iron-based nanoparticles: a case study of iron nanoparticles from Argentine Yerba mate and green tea extracts useful for removal of pollutants in soil and water Marta I Litter has completed her PhD in Chemistry from Buenos Aires University, Argentina, with Post-doctoral studies at the University of Arizona, USA. She is a Superior Researcher of the National Research Council and Full Professor at the National University of General San Martín. She has been the Head of the Division of Environmental Chemistry Remediation (National Atomic Commission) all in Argentina. She has more than 200 scientific publications in international journals, books and book chapters. She has received the Mercosur Prize in Science and Technology (2006 and 2011) and was President of the International Congress on Arsenic in the Environment (2014). She was designated pioneer on photocatalysis in Argentina (2016) and accepted as a Member of TWAS (2018).

A revision on the literature on green synthesis of iron-based nanoparticles and their application as nanotechnology for removal of pollutants from soil and water will be presented, highlighting the uncertainties about their chemical identity and effi ciency for removal of pollutants. In addition, the need of further improvement in order to obtain stable nanoparticles of controlled size and morphology, conducive to large-scale synthesis of iron nanoparticles for environmental remediation and hazardous waste treatment applications will be stressed. As a study case, the preparation of iron-based nanoparticles synthesized from iron salts and water extracts (polyphenols) of powdered Yerba mate (Ilex paraguariensis Saint Hilaire) will be described. Yerba mate is highly consumed as an autochthonous tea in Paraguay, Uruguay, Brazil and Argentina. The nanomaterials have been completely characterized by XRD, Raman and Mössbauer spectroscopies and their applicability for Cr(VI) and As(III)/As(V) removal from polluted waters have been tested in laboratory tests with synthetic and real waters from Argentina and compared with other tea extracts such as green tea and commercial zero valent iron nanoparticles. The nanomaterials
are low-cost, nontoxic and can be easily produced at large scale. They can be used for removal of other pollutants (e.g. mercury, uranium, lead, nitrate, halogenated hydrocarbons, pesticides such as 2,4-D, etc.).

Niki Baccile has graduated from the University of Padova (Italy) and has completed his PhD in Materials Science from University Pierre and Marie Curie, Paris 6 (now Sorbonne University) and Post-doctoral studies from University of Montpellier (France) and Max-Planck-Institut für Kolloidund Grenzfl ächenforschung Stute (Germany). He is a CNRS Researcher at the Laboratoire de Chimie de la Matière Condensée de Paris at Sorbonne University. He has published more than 70 papers in internationally renowned peer-reviewed journals on topics going from Green Chemistry, Materials’ Chemistry, Physical Chemistry and Soft Matter. He has contributed to the developments in the field of biosurfactants in the past 10 years, collaborating with the worldwide experts in the field of Industrial Biotechnology.

Microbial biosurfactants are one of the most fascinating success stories in the field of green chemistry since at least four decades. Specific microorganisms are able to produce large quantities of biodegradable molecules with surface active properties. If phospholipids, lipopeptides, glycolipids and polymers are the major classes, glycolipids certainly constitute the most interesting one for the large produced amounts. Compounds like sophorolipids and rhamnolipids are now well-known and routinely employed in detergent and cosmetic formulations, for their low toxicity and high biodegradability. Despite these important achievements, many questions still lie unanswered and the potential of these molecules
is in fact largely underexploited, especially in other domains like colloid chemistry and materials science. Th is paper will illustrate the recent advances in terms of molecular developments through both chemical and genetic engineering tools, thus expanding the portfolio of existing molecules. It will also discuss the most recent understanding between selected molecular structures and their corresponding physicochemical properties. It will conclude on the potential development of biosurfactantbased soft materials, including hydrogels, tough foams and emulsions. 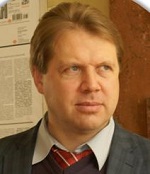 Alexander O Terent’ev has obtained his PhD in 2000 and DSC degree in 2009. At this time, he is a Professor in D. Mendeleev University of Chemical Technology of Russia, Head of the laboratory in N.D. Zelinsky Institute of Organic Chemistry RAS, and Head of the laboratory in All-Russian Research Institute of Phytopathology. His research interests are Organic Chemistry, Medical and Agricultural Chemistry and Chemical Technology. He has published 120 research papers and 30 patents.

In the last decade, the progress in the chemistry of organic peroxides was prompted by numerous works of their antimalarial, anthelmintic, antitumor, growth regulating and antitubercular activity. Th e importance of these studies is illustrated by the 2015 Nobel Prize in Medicine awarded to Youyou Tu for the discovery and development of artemisinin. Our work develops methods for the synthesis of various types of cyclic and linear peroxides using of H2O2 and carbonyl compounds with high selectivity. An important feature of these methods is high atom effi ciency and wastelessness of the synthesis.